Ask your WordPress questions! Pay money and get answers fast!

Hoping someone could help me fix the formatting in my blockquote in the WP twenty eleven theme. Has anyone messed with this feature in this theme?

My site is fairly basic - here’s a sample post with some blockquotes from my site: http://managingmigration.com/2012/01/08/japan-experimenting-with-points-based-system-for-labor-migration/

The default blockquote text of the theme is set to italics for all the quotes. In the main style.css sheet I switched the code to normal from italic (which it originally was) under “font-style:” below


This worked in part – the text in blockquotes, when on the actual page, now shows up as normal (non-italicized). BUT – in wordpress, in the Visual view editor box, it still shows up in italics. If I highlight it and italicize that text (in Visual view), it will make the text look normal (non-italicized), but on the actual page of the site it won’t do the opposite (and make it actually italicized). Sorry if that’s a little confusing, happy to try and clarify if it doesn’t.

Basically, there is no way that I can italicize the text in my blockquotes (even if it looks like it in the Visual post or page editor). I can boldface text, but there is no way to make italics work. (SEE IMAGE ATTACHED)

I assume I’m just missing some code somewhere or there’s some code that needs to be edited, and I’m sure it has something to do with the blockquote being set to italics by default in the twenty eleven theme.

Anybody know how to fix this, and can tell me what code I need or is missing?? Thanks! 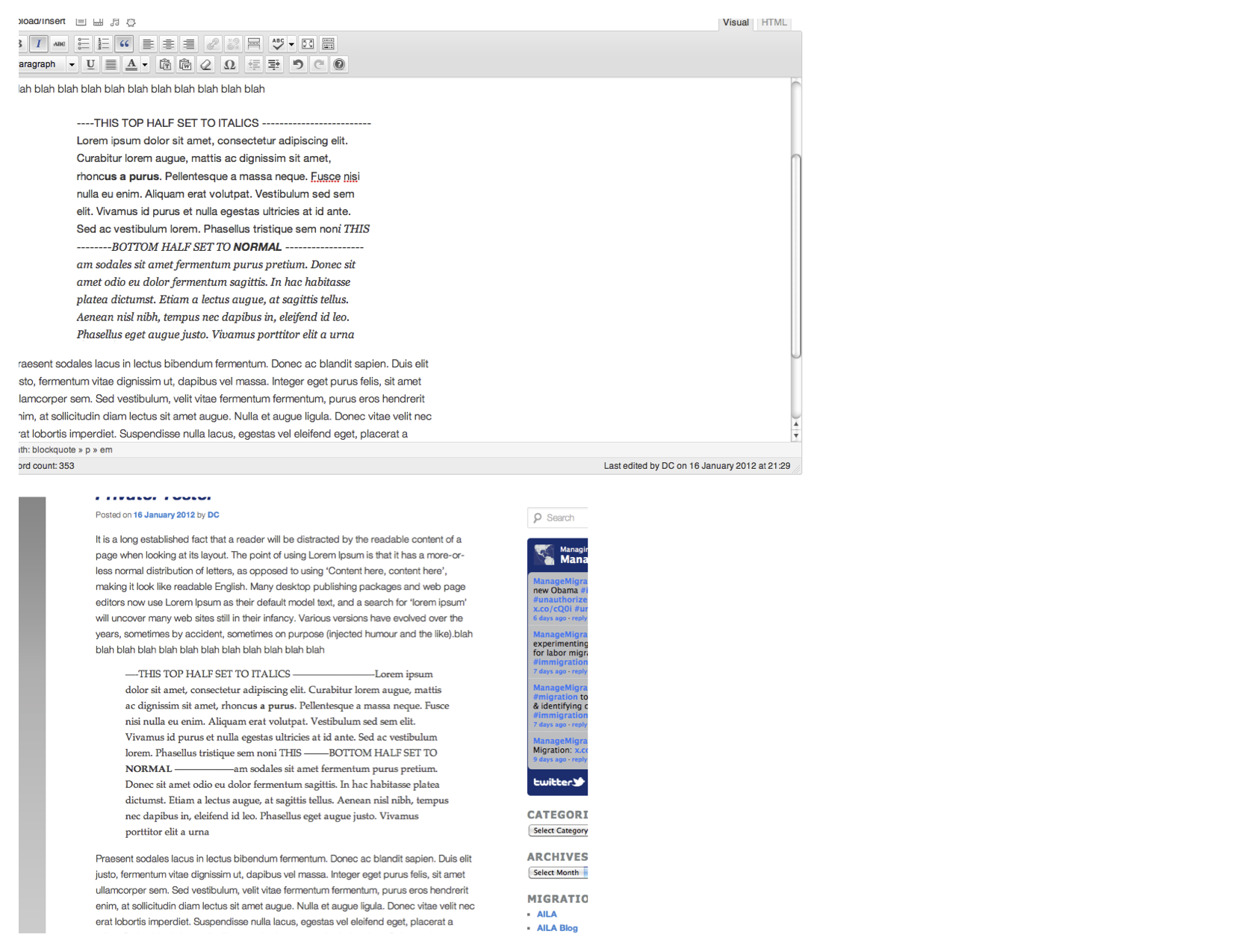 Hi, your css should be:

If you also want to adjust the visual editor, you need to paste these declarations in the "editor-style.css" file also.

It worked!!
Although I still can't get it to work right in the visual editor. I added the code to both editor-style.css and editor-style-rtl.css also, but it basically works backwards now - if it's in italics in visual editor, it looks normal on the page - and vice versa.

But I can live with that I guess...

What i understood :
<blockquote>You need to italizice text in front end but can not...</blockquote>

I am unable to have blockquote text that is partially in italics - and partially normal. It is either all in italics or all normal - and that can only be fixed through setting the code to normal or italics at "font-style" - in the code shown above. This occurs regardless of what the text looks like in the visual editor (it looks like it's in italics by default in visual editor, even if it's not - see image). I want to be able to have blockquotes that can be like this, showing both italics and text:

Damn i thikn i don't get it !
You said :
<blockquote>The default blockquote text of the theme is set to italics for all the quotes. In the main style.css sheet I switched the code to normal from italic</blockquote>
and
<blockquote>there is no way that I can italicize the text in my blockquotes</blockquote>

If you want to italicize your blockquote texts ... just do this :
blockquote {
font-family: Palatino;
font-style: italic;
font-weight: normal;
margin: 0 3em;
}

have you tried resetting all the style you have? from the visual view?
then on the html view try to delete unnecessary tags?